What default method is

With the release of Java 8 you can modify interfaces adding new methods so that the interface remains compatible with the classes that implement the interface. This is very important in case you develop a library that is going to be used by several programmers from Kiev to New York. Until the dawn of Java 8 if you published an interface in a library you could not add a new method without risking that some application implementing the interface will break with the new version of the interface.

With Java 8 is this fear gone? No.

Adding a default method to an interface may render some class unusable.

Let’s see first the fine points of the default method.

This is also true when only one of the interfaces implement the default method and the other one only declares it as abstract. Java 8 tries to be disciplined and avoid “implicit” things. If the methods are declared in more than one interfaces then no default implementation is inherited, you get a compile time error.

However you can not get a compile time error if you have your class already compiled. This way Java 8 is not consistent. It has its reason, which I do not want to detail here or get into debate for various reasons (e.g.: the release is out, debate time is long over and was never on this platform). 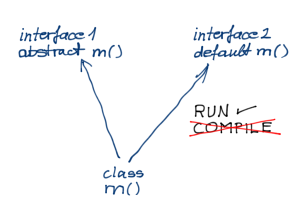 In this case the class runs. You can not compile it again with the modified interfaces, but if it was compiled with the older version: it still runs. Now

When there are two interfaces providing default implementation for the same method the method can not be invoked in the implementing class unless implemented by the class (again: either directly or inherited from another class).

The class is compatible. It can be loaded with the new interface. It can even start execution so long as long there is no invocation to the method having default implementation in both interfaces.

The class contains a main method so we can execute it in our test. It tests if there is any command line argument so we can easily execute it with and without invoking the method m().

We can compile and run the class using the command lines:

The directory compatible contains a version of the interface I2 that declares the method m() abstract, and for technical reasons it contains I1.java unaltered.

This can not be used to compile the class C:

The error message is very precise. Even though we have the C.class from the previous compilation and if we compile the interfaces in the directory compatible we will have two interfaces that can still be used to run the class:

The third directory, wrong contains a version of I2 that also defines the method m():

We should not even bother to compile it. Even though the method is double defined the class still can be executed so long as long it does not invoke the method, but it fails as soon as we try to invoke the method m(). This is what we use the command line argument for:

When you start to move your library to Java 8 and you modify your interfaces adding default implementations, you probably will not have problems. At least that is what Java 8 library developers hope adding functional methods to collections. Applications using your library are still relying on Java 7 libraries that do not have default methods. When different libraries are used and modified, there is a slight chance of conflict. What to do to avoid it?

Design your library APIs as before. Do not go easy relying on the possibility of default methods. They are last resort. Choose names wisely to avoid collision with other interfaces. We will learn how Java programming will develop using this feature.

4 thoughts on “Java 8 default methods: what can and can not do?”